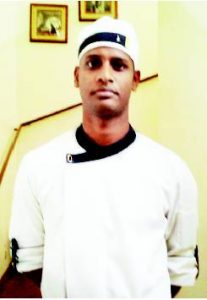 Food for the soul

Abbas Khan looks every inch the trainee chef in his uniform. The black-and white outfit sets off his pearly white but shy smile perfectly. No one would be able to guess that the 22-year-old has a long history of aggression, flitting from one boys’ home to another.

Khan has been at Tres, one of the new French eateries in the Capital, for just a week and the transformation is already visible. He comes in at 9am and leaves at 10. 30pm, working longer hours than he’s supposed to. His English has already picked up and while he may not be able to converse very fluently, his pronunciation of the French desserts and breads is spot on. In fact, if you were to dine there and you ordered a cheesecake or creme brule, chances are you would be eating Khan’s creations. And the lavas you enjoyed munching on last week you were there were also made by him.

“I worked at Optus Sarovar Portico for a year and they had different recipes for breads and desserts. I have to read my notes every night to make sure I remember it correctly and even though the hotel kitchen was bigger, working in the restaurant with the chef paying personal attention is much better, ” Khan says, making his preference for the hands-on learning experience clear.

Jatin Kumar is a cheerful 18-year-old who loves playing cricket but nowadays can be seen working at Chez Nini, the charming restaurant at the Capital’s Meharchand Market. In one week, Kumar has learnt how to set the table – “I’m very good at it now” – and is responsible for gleaning feedback from guests through SMS. Whenever he gets a moment, he helps the chef whip up a fresh batch of warm cookies. And even though he claims to make delicious aloo paranthas, he’s leaning towards learning everything he can about baking.

It’s not unusual for young boys and men to work in restaurant kitchens but what’s encouraging about the story of these boys is that they have no professional training. All they have going for them is their enthusiasm and the willingness to make something of themselves. Both Khan and Kumar are students and residents of Pallavanjali, an organisation that runs educational and professional programs for the underprivileged and in-need sections of society. It also runs educational and residential initiatives like Second Chance School.
At any point of time, there are 15-20 boys staying and they are awarded internship programs in the hospitality industry, fashion industry and even accounting. Once they start earning enough money to sustain themselves and their family, they move out of the hostel. “The change that we see in these boys is so heartwarming and when they no longer need our help, it’s a great feeling, ” says Pallavanjali head Shaloo Sharma.

It was after a visit by five Michelin star chefs in September that Khan, Kumar and three other boys, Anil Kumar, Mohammed Javed and Shiva Manglu that efforts were made to place these boys as trainees and interns at restaurants like Chez Nini, Tres and L’Opera. The chefs’ visit was arranged by Creative Services Support Group, which aims at providing opportunities to people from “underprivileged backgrounds in the creative sectors and giving them the tools to lead fulfiling and confident lives”. Celebrity chefs like Frances Atkins, Ian Curley, Vineet Bhatia, Marcello Tully, Anjum Anand and Laurie Gear had come to India to discuss and talk on the influences and challenges in the gastronomy sector.

“Our main thrust is two-fold – we want to provide opportunities to the underprivileged within the creative sectors and also allow an exchange of knowledge within the industry. What we are keen to do is not look at a sector in the usual manner but look at it horizontally and the influence it has on society overall, ” says Anand Kapoor of CSSG.
The Chinese proverb, “give a man a fish and he eats for a day;teach a man to fish and he can feed himself for life” is what CSSG followed when they got together restaurants to take in trainees from among the kids at Pallavanjali. Interestingly, Pallavanjali has existing training arrangements with the Trident, Oberoi and Sarovar hotels in Gurgaon under one of its programs.

“Shows like Masterchef have really captured the imagination of the youth but we must remember that that is TV. The culture in India is very different to the culture abroad where kids take jobs waiting tables in restaurants and working in junior roles in kitchens. And we wanted to give these boys the opportunity to learn as much as they possibly could from this opportunity, ” Kapoor, who is the co-founder and director of the Image Foundry Studios, says.

Just like Kumar has learnt when is the exact moment you need to take the cookies out of the oven. “When they smell the best, ” he smiles.