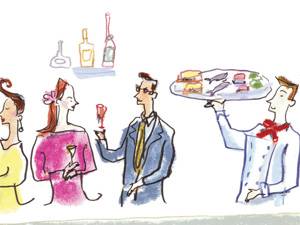 Foreign policy of food: India is a laggard in deploying cuisine in diplomacy

On August 15, at President Pranab Mukherjee’s first official ‘At Home’ in Rashtrapati Bhavan’s Mughal Gardens, the menu will remain drearily unchanged: samosas, idlis, sandwiches and tea-coffee. Contrast that with the White House, where food is an important tool of US public diplomacy, with everything from its executive chef to its kitchen garden and banquet menus carefully selected and promoted.

“It was too late to change the At Home menu,” says a source in the presidential establishment, “but we are very aware that Rashtrapati Bhavan is a symbol of pan-Indian identity and its menus should reflect that. Some Bengali dishes will definitely be there in future banquets, for a start.” If that means India is waking up to food diplomacy, it still falls far short of what other nations are doing.

Come September, six top British foodies, including Michelin-starred chefs like Vineet Bhatia and Frances Atkins and TV chef Anjum Anand, will be coming to India for a summit culminating in a Rs 25,000 per couple charity dinner in a hotel as well as a gala at the home of the high commissioner in India. And in October, Australia is bringing the three foodie hosts of the hugely popular Masterchef Australia to India for cooking demonstrations and dinners.

Spilling Out Secrets
Leveraging culinary prowess is not a new idea. Talleyrand, the wily French diplomat famously told Napoleon, “Give me a good chef and I’ll give you good treaties!” And the 17th century writer Francois de Callieres says in The Art of Diplomacy, “The natural effect of good eating and drinking is the inauguration of friendships and the creation of familiarity, and when people are a trifle warmed by wine they often disclose secrets of importance.”
Little wonder then that some nations have deliberately invested in it to raise their image. Thailand was the pioneer with its 2002 international campaign to promote its food; South Korea followed with a $40-million push in 2009 and then Taiwan with $37 million in 2010.

Even US Secretary of State Hillary Clinton, once famously dismissive of ‘baking cookies’ said in a recent email that “showcasing favourite cuisines, ceremonies and values is an often overlooked and powerful tool of diplomacy.” Now the state department has launched a ‘Diplomatic Culinary Partnership’, hired an executive chef, and regularly ropes in celebrity US chefs for banquets.

Moveable Feast
So lending a helping ladle to diplomatic efforts is now official. “Promoting the best of British cuisine is one of the most enjoyable parts of my work,” says British High Commissioner James Bevan. “The UK has produced exceptional chefs and attracted incredible talent from overseas, not least from India. I can think of no better way to celebrate our heritage, creativity and diversity…”

“Food provides the naturally convivial setting for interactions between Australia and India and lays the base for a deeper relationship,” says Australia’s deputy high commissioner Lachlan Strahan.

Though the ministry of external affairs’ relatively new public diplomacy division has commissioned documentaries on Indian food featuring famous chefs, special secretary Pinak R Chakravarty admits that food diplomacy initiatives are usually locally generated, rather than practised as a matter of policy. “Most countries have Indian restaurants, so our missions abroad team up with them for promotions,” he says.

Indian delicacies’ were served up at the India-Africa summit in Addis Ababa in 2011 with such local help, for instance. One celebrity chef initiative with Indian embassy participation, however, was the Maximum India festival in Washington DC, also in 2011. Chef Hemant Oberoi, now in Tokyo for another Indian food event, says his menu “drew 1,000-1,200 people a day for desi street food and fine dining”.

But most initiatives are far less exciting. To coincide with the 2012 Olympics, for instance, the Tea Board’s London office organised a two-week promotion at Harrods and set up a mini tea garden at the Royal Festival Hall, with nominal participation by the coffee and spices boards and APEDA, the export promotion body for farm items. It was hardly atmospheric or evocative of India’s huge food legacy.

With the hospitality sector willing to help, Official India — from Rashtrapati Bhavan to Indian embassies— should leverage India’s cuisine better. Even private initiatives can be stepped up, like the ‘Vindaloo Against Violence’ dinners organised by a Melbourne church after the attacks on Indians, or Conflict Kitchen, the Pittsburgh restaurant that only serves food from nations at odds with the US, to foster understanding!